Cleveland: “Senate Republican budget balances at the expense of the middle class”

“With today’s roll out we now have the clear picture of our state’s budget options. Gov. Inslee led the way with his budget proposal, the House of Representatives unveiled its plan last week, and today the Senate Republicans released their plan.

“I believe that there is something to gain from each proposal, however, I am most concerned that the Senate Republican budget relies on balancing the budget at the expense of the middle class instead of those who can afford to pay their fair share – be it the largest polluters in our state, or the wealthiest few.

“Today’s budget relies on band-aid fixes to long-term problems. Fund transfers, raiding accounts, debt, and gimmicks give the appearance of a budget that “lives within our means.” This is not a solution that can be sustained over time.

“As we have more time to find out what is actually included in the Senate Republican budget, I am sure more concerns will come up. With all of the budget options now available, the negotiations may begin in earnest as we consider the largest bill of the session. With less than a month before the scheduled end of the legislative session, we have much work to do so we may create the best future possible for our state and all of our citizens.”

Sara Ronen serves as page in the state Senate

During the week of March 9, Sara Ronen served as a page in the Washington State Senate. Sen. Annette Cleveland, D-Vancouver, sponsored Ronen’s week-long experience in the Legislature.

“It was a pleasure to sponsor Sara,” said Cleveland. “She is a positive and intelligent student, and I hope she enjoyed her week in Olympia.”

During the week pages assist senators and staff, attend lectures with guest speakers and go to page school where they create their own bills in a mock committee setting. Ronen drafted a bill aimed at reducing child hunger. “The bill would allow for more free and reduced lunches, and give access to food in the summer for children who need it,” she said.

Ronen said she gained new perspective of government through the page program.

“I learned about the hearing process, and how much it matters to have a majority,” she said. “I also enjoyed paging on the floor. I didn’t know we’d be working so close to senators and where the public isn’t allowed to be.”

Ronen offered advice for anyone who might be interested in paging. “If you are interested in government or politics at all, you shouldn’t be scared to apply, it’s an amazing experience,” she said. “It was an honor to work here every day.”

In addition to state government, Ronen has an interest in international studies, teaching and joining the Peace Corps in the future.

Ronen, 16, is a sophomore at Vancouver School of Arts and Academics. She also participates in Model United Nations and choir.

Did you miss the telephone town hall?

This week we have been back in committee hearing the bills that have come over from the House of Representatives. The next committee cutoff deadline is on April 1, so we have a little more time to hear testimony on bills before we are back voting on the Senate floor. Legislative deadlines help move bills through the process and can act as a barrier to both good and bad legislative proposals.

During floor debate the Senate considered and passed Senate Bill 5513 – a bill that removes protections for younger workers who are injured on the job, many of whom may have young families. These workers may not have the resources to weather a sudden loss of income and may be forced to accept a lump-sum settlement to pay for immediate needs to the detriment of a longer-term solution that offers sound financial security and reliable wage-replacement.

When I was a child, my family could have been greatly impacted by this legislation. My father was working one night loading lumber onto ships with his crew when an accident happened. A hook holding the lumber broke free and knocked off my father’s hard hat and threw him 40 feet into the hold of the ship. With the injuries he sustained and with the existing protections in place as he recovered, my family was able to get by and survive. These important protections need to remain. We need to make sure that we are protecting our workers today from the accidents that could happen tomorrow. (Please click the photo to hear my floor speech). 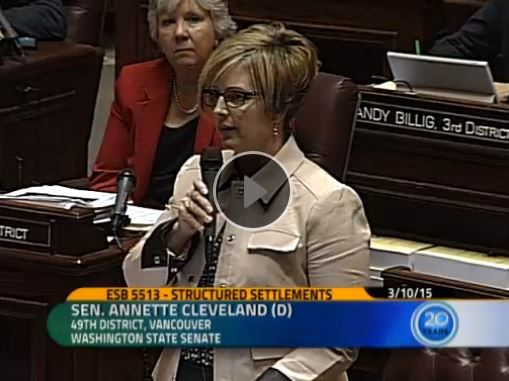 One bill I was pleased to see not advance to the Senate floor for consideration was Senate Bill 5197 – a bill that would allow entities who have applied for project permits to circumvent the permitting system if a permit is not issued after 90 days and could allow entities to go directly to the Superior Courts in their county for project approval. Many very large and complex projects involve extensive permitting review and analysis that requires more than 90 days, while often smaller projects take much less than 90 days for a permit to be issued. For the larger projects, this bill could, in effect, substitute our already overburdened courts for the agencies in reviewing and issuing permit decisions.

In our community, this bill could have had the potential to sidestep the current Energy Facility Site Evaluation Council (EFSEC) process for making decisions around the proposed oil-by-rail facility. We need to allow that process the chance to have all of our input and hear our concerns. I respect the process and its integrity. This bill would have potentially circumvented the current process in our state and allowed the courts to decide the future of many communities across Washington, including ours.

I am proud to be the sponsor of the Equal Opportunity Pay Act in the Senate. The House version of this bill, House Bill 1646, passed through the chamber and has made its way to the Senate. When our state recognizes that equal pay should be given for equal work and when employees are not afraid of retribution for asking questions about their wages, we will have made significant progress in our state. Fairness and justice for equal pay for equal work will help all Washington families thrive. I look forward to actively advancing this bill in the Senate and would welcome your help in contacting the Chair of the Senate Labor and Commerce Committee, (Committee information, click here) to ask that this important bill be heard. I will be sure to update you on this bill’s progress.

Thank you for listening in and participating in our telephone town hall meeting!

Last Thursday night, Reps. Sharon Wylie and Jim Moeller joined me in hosting a telephone town hall. It is a great and convenient way to connect and speak directly to many of you! We covered a number of topics including: oil transportation safety, the proposed oil facility, education funding, reducing class sizes, how to get more people involved in the political process, and protecting our social safety net to name just a few. I encourage you to check my website soon for the full audio recording of the telephone town hall.

I always enjoy when constituents come to visit me in Olympia. Last week, I met with many constituents including a wonderful group of young people from the League of United Latin American Citizens.

Sen. Annette Cleveland, Rep. Jim Moeller, and Rep. Sharon Wylie will join constituents over the phone at 6 p.m. on Thursday, March 19, for a telephone town hall. Constituents will hear a brief overview of what’s happening in Olympia and will have the opportunity to ask their lawmakers questions and get answers in real-time.

“It is difficult for me to ask the people of my district to pay a higher gas tax and additional fees without including a plan for the next steps in replacing the lifeline in and out of my community – the Interstate 5 Bridge – which is why I voted against the revenue and spending portion of the transportation package.

“I continue to hear from constituents who are having trouble making ends meet. I want to be sure that when I commit my community to a transportation package lasting until 2031, that it is a proposal that addresses the most critical infrastructure and safety needs of our state. Failing to address the bridge is unconscionable.

“With this agreement Clark County will remain a donor county paying taxes to support other infrastructure investments in other parts of the state. Over the course of the last decade, Vancouver was told to wait our turn for other state megaprojects that took priority over replacing the I-5 Bridge. We’ve waited our turn. Our turn has arrived. Now is the time to fund the I-5 Bridge.

“Investments in a replacement bridge would have brought an estimated $3.1 billion to the region. These investments would help spur the jobs and economic investment our region desperately needs. Lack of replacement of the I-5 Bridge means continued congestion, an inability to efficiently move freight and goods in and out of our state, continued accidents, unreliability, safety hazards, and discourages businesses from locating to our region.

“I am pleased that the Senate was able to have the discussion about a transportation package. I know it is work in progress, however, I am disappointed that every attempt to begin discussion of replacing the I-5 Bridge has been blocked. It is unfortunate that there are legislators focused solely on the short-term and not the longer term success of our region.